Clearly The Guardian doesn’t want to hear that bit of information.

Frankly, if there weren’t nine federal refugee contractors being paid on a per refugee head basis to bring refugees to your towns and cities, maybe then a realistic policy could be advanced to care for (legitimate) refugees near their homes so that returning them to their homes and to their familiar cultures would be the number one priority of humanitarian care.

Perhaps if this pattern could be broken now—Middle East wars=flow of migrants to the West—it would be a very important legacy for Trump to leave us with.

Trump and Haley could break the pattern! No more knee jerk admission of ‘refugees’ with every Middle East conflict.

Here Nikki Haley says what the No Borders Left never wants to hear:

Donald Trump’s ambassador to the United Nations on Sunday defended the president’s ban on allowing Syrian refugees into the US by claiming that people displaced due to the country’s civil war did not actually want to leave the region.

When asked how she justified the Trump administration admitting almost no Syrian refugees while also bombing Assad regime targets in the country, Nikki Haley cited conversations she said she had had with refugees at camps in Jordan and Turkey.

“Not one of the many that I talked to ever said we want to go to America,” Haley said on Fox News Sunday. “They want to stay as close to Syria as they can.”

In a related story at Hurriyet we see that the bloom is off the rose as Germany begins restricting family members (limiting chain migration!):

Attorney Allured  was introduced by Pastor Dale Sollom-Brotherton.  See information on the church website about the speaker.

Mr. Allured is a member of First  Lutheran church in Palo Alto, CA.

Christ Lutheran Church in Aptos, CA supports  the AMMPARO program.  The church  currently provides  housing and other  support for a   family  from El Salvador.  The church  may assist  persons seeking refugee status via  advocacy in the legal process  as Guardian Angels.

AMMPARO was envisioned to accompany children today and in the future who are forced to flee their communities because of complex and interrelated reasons, including chronic violence, poverty, environmental displacement and lack of opportunities in El Salvador, Honduras and Guatemala.

Some of  attorney  John Allured’s  remarks and some questions that were asked:

“The rate of  those seeking asylum  from  Mexico has gone down and the rate from Central America has gone up.

Asylum seekers must show “credible fear”.   What is that?

“Migrants do not have right to legal representation.

If “credible fear” is found the case moves forward to “removal status”, the juvenille is then  “placed” and the case goes before a judge.

“The chances of defeating removal increased 5 times when migrant had counsel. So says Attorney Allured.

“How does ‘gang violence” fit into all this?  If only “gang violence” you have to do your homework to establish that your case fits within one of five categories.

“Asylum is discretionary.  You  must show “good character” via employment, church membership, credible witnesses and that you are a deserving  person.

There are two Hearings —  The first one which is on  the Master Calendar  is open to the public.

Asylum applicants  have no “right” to due process.  San Francisco judges (the one he observed) bend over backwards so applicants can establish their case.  In San Francisco (his experience),c ases are typically continued 5-6 times before moving on to”removal” status.  Which judge  hears the case — in what part of the US — matters significantly.

Church congregations can serve as “guardian angels”. There’s nothing to fear.  It’s an informal process. Judges do not wear robes.  The federal rules of evidence serve as a guide.

Questions asked during and after Mr. Allured’s  presentation at Christ Lutheran church in Aptos, CA   included:

After the presentation persons attending were encouraged to meet each other.

Information concerning various resources was available including  Tell Me How it Ends, an essay in Forty Questions by Laleria Luiselli.

Aptos Psychologist:    “I was a stranger and you offered me welcome …  ”   That’s the message of Christ Lutheran Church in Aptos, CA

Take Away message:   Per this presentation,  you better get an attorney  if you are from Central America  seeking asylum.  Persons seeking asylum in the U.S.  have no legal right to representation.

Concerning gang violence,  Monterey County (Salinas, CA  is the county seat) is ranked as  the youth homicide capital of California for four out of the past five years.  Gang violence is continually in the news. California has its own gang related problems.

People are not fleeing California for Central America because of ‘gang violence’.  That there is economic opportunity, freedom and rule by law here in the U.S. draws people  here.  Legally and illegally.  People who come need to follow the  U.S.A. immigration laws that are in place.

Migrants allowed  to remain in Switzerland because  they  risk death in their homelands are using welfare money to fund holidays back home in Eritrea.  That’s wht  the Basler Zeitung reports.

The Swiss newspaper notes that thousands of migrants each year go to Eritrea for their holidays each year — despite their having supposedly fled the northeast African nation in fear of their lives.

Although a large proportion of Eritreans in Switzerland have been refused asylum, authorities are powerless to deport them because their homelands are deemed to be too dangerous by the country’s refugee policy.

While there are no direct flights to Eritrea, the Basler Zeitung says it found that up to fifty people a day are leaving Switzerland in order to holiday in the African country.

It typically costs around 599 Swiss Francs (£475) in January or 650 Swiss Francs (£516) in high season for a return journey to Eritrea according to the German language daily.

The paper  notes that taxpayer stipends to migrants must be quite generous as the vast majority of Eritreans residing in Switzerland live on welfare.

Why so few Christians?

As you read this, hum the tune from  Peter Paul & Mary song:  Where  did all the  flowers go?

“Where did all the flowers go …
Syrian’s Christians,    ever more …

“Five hundred  thousand  … Christians gone.   [that was the number of Christians in Syria]

“their  ancient  bones,
And fled …. their  Muslim foes

but left in  fear of Islam law.  That gives all power to the Muslim Pa.

“So, where did all  the Syrian Christians  go?

“Thank you,  Hilary, Secretary Oooo,
That  this past year for evermore,

64  Syrian Christians  came through  our  doors,

Allowed in for now — perhaps for ever more.

as refugees
To grace our  soil.”

Aptos Psychologist: Ask Hilary why only 64  Syrian Christians out of 13,000+  Syrians were admitted to America this past year?

Create jobs?    Hire a Syrian and get him off welfare. Maybe.

Bill Clinton wants the U.S. to hire Syrian refugees to rebuild Detroit. Detroit has a housing problem.
That’s from a video made via the Clinton Global Initiative.
Hilary wants Bill in charge. And Hilary’s  goal is to re-locate to Detroit  almost as many Syrians as the population of Detroit.
About the Syrian migrant crisis Bill Clinton said:  “The truth is that the big loser in this over the long run is going to be Syria. This is an enormous opportunity for Americans,”

Detroit has 10,000 empty, structurally sound houses—10,000. And lot of jobs to be had repairing those houses. Detroit just came out of bankruptcy and the mayor’s trying to do an innovative sort of urban homesteading program there.

But it just gives you an example of what could be done. And I think any of us who have ever had any personal experience with either Syrian Americans or Syrian refugees think it’s a pretty good deal.

Hillary Clinton has called for a 550 percent expansion to the importation of Syrian refugees.

Based on the minimum figures she has put forth thus far, a President Hillary Clinton could potentially import a population of refugees (620,000) that nearly equals thepopulation of Detroit (677,116)

Clinton did not mention the fact that, in the United States, 91.4 percent of recent refugees from the Middle East are on food stamps, and 68.3 percent are on cash welfare, according to data from the Office of Refugee Resettlement in the Department of Health and Human Services.

Firenze Sage:  Hillary’s answer to the job problem is to put Bill in charge. Whata girl!! 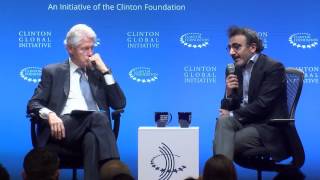